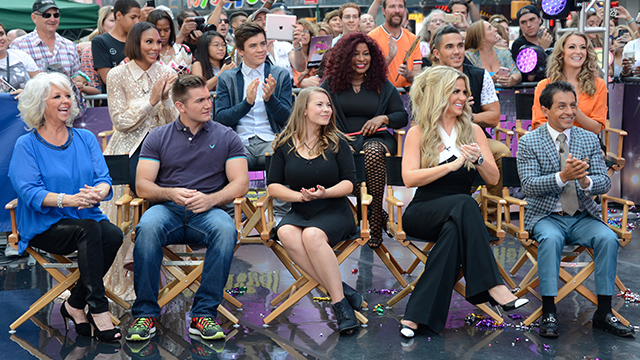 Dancing With the Stars premiered their 21st Season this past Tuesday on ABC. I can honestly say that I’ve never watched the show but they have a good line up this season. I only know about six people honestly, but I was intrigued with this first episode.

This year’s line consist of:

So, on with the show, I think majority of the dancers were nervous but the top three that I think killed it were Tamar Braxton, Bindi Erwin and Alexa PenVegas. Tamar is already confident as it is, so it would be a shame if she didn’t bring that attitude in her performance. Bindi is full of energy and life and her personality showed in her performance. I had never heard of her before the show but when I saw her, she was full of so much life and excitement and it’s hard not to like her. OMG  Alexa PenVegas killed her performance. She was so speedy and sharp. She’s grown from that little girl in Spy Kids, to a talented young lady.

Some performance I was shocked about were Kim and Chaka, Kim is extremely nervous which is expected but she was on reality television acting out like it was no biggie, I would have expected more from her but hopefully she improves as the weeks go on. Chaka, Miss Chaka;  The Queen of Funk was a little rusted or maybe the type of dance she did this week wasn’t in her ball park.

I know I may sound sexist by only commenting on the female performances but I have so comments on the guys as well. Mr. Nick Carter, the boy band hottie, he started off kind of shaky but he got in the groove of things and had a nice performance. Alek, whom I’ve never heard of, had a sweet ballroom performance that was very elegant and since he’s an American hero in a sense, I’m sure he won the viewer’s heart Tuesday night. Gary Busey–truthfully he just seems too old to be dancing. Yes you can dance at whatever age you feel but Gary didn’t do good to me and he may want to hang it up. Yeah it was worth a try but I don’t think he’ll get far. Also he seems like a creek but that’s my personal opinion.

I look forward to the results of next weekend. Hopefully known of my favorite people get voted off.

DANII GOLD is out!