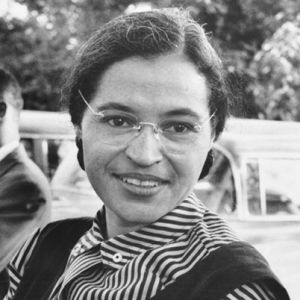 I am dedicating fact 4 of the month to Ms. Rosa Parks, who was born today, February 4. Everyone knows what Rosa did but just a little refresher, On December 1st, 1955, she refused to give up her seat to a white man. She was already sitting in the “colored section” but since the “whites only section” was filled, the bus driver told four black people who were sitting in the first row of their section including Rosa, to give up their seats. Well everyone gave up their seat but Rosa.

Rosa was later arrested and THAT is what initiated the Montgomery Boycott. After Martin Luther King Jr. organized the boycott having blacks walk, carpool with others and even only riding in black-operated cabs. The boycott went on for a year and the bus company suffered financially, because of the lost of business. Due to the financial lost, On December 20, 1956, the City of Montgomery had no other choice but to desegregate the laws on public buses.

In later interviews Rosa Parks said that the reason she didn’t get up , wasn’t because she was physically tired but just “tired of giving in.” With her standing her ground and being brave, she made history.

HAPPY BIRTHDAY TO ROSA PARKS, AND MAY SHE RESPECTFULLY REST IN PEACE.