St. Louis native Drew Negus is more than just an artist. He’s a creator, from rapping to songwriting, to engineering and even film scoring. He’s been making music for over 15 years and doesn’t plan on stopping. He’s collaborated with artists in Atlanta and even Los Angeles. He likes to put positive energy into my music and wants to make the world a better place. Check out his interview below, where he talks about being in a group, his music experience and his projects.

Danii Gold: How did you get into doing music?

Drew Negus: Looking back I have always been into music even before I chose it as a career. I played instruments in elementary school and sung in the choir at church. I even played a rapper in a school play in 6th grade! I started taking music seriously when my best friends and I started a group called A1O. We released a song on an old social media site, “Bebo” and got a great response. The website even reached out to us and offered us what was basically a marketing deal! They agreed to promote our music if we only released music on their website.

Danii Gold: I definitely remember the Bebo days lol. With you being in a group back then, how did the four of you collectively contribute to your music?

Drew Negus: Our process was always fun and organic. We would all contribute to making the beats (not having a clue what we were doing) and then we each would come up with flows and melodies. Most songs would start off like a cypher with the next person taking over every 4 or 8 bars. We had a lot of fun for sure!

Danii Gold: Do you think being in a group is still as successful as being a solo artist?

Drew Negus: From a financial standpoint it’s easier to invest in the music as a group for sure! On the other hand money is split more ways. Clearly groups like the Migos show you can still be very successful as a group so I would say Yes.

Danii Gold: Would you or have you collaborated with your group members since you all went your separate ways?

Drew Negus: I have produced for my former group members since we separated. I don’t know what the future holds as far as making songs together but it’s a possibility.

Drew Negus: I Am Drew; Artist, Producer, Engineer, and Songwriter

Danii Gold: What do you enjoy most, writing music, being an engineer or artist ?

Drew Negus: Lately I have found the most joy as an artist! This is really a full circle moment for me, starting out as an artist and finally finding my way back! It’s definitely close though because I Love producing! I also enjoy mixing! It’s just something about turning beats into actual songs that people can relate to that is very fulfilling to me.

Danii Gold: You’ve recently produced and engineered for artists in ATL and LA. Would you consider moving out of St. Louis to work with other more established artists or do you feel like you can bounce back and forth?

Drew Negus: I actually moved out of St. Louis In 2010 and it is one of the best decision I have made! I have lived in Atlanta, Los Angeles, and Dallas. I would encourage any upcoming musician in St. Louis to expand their horizons. St. Louis music scene is definitely thriving and has some of the best talent I have seen. There are just much more opportunities to grow and learn about the industry in other cities like Atlanta and LA. I have found myself in rooms with artists, producers, and A&R’s that I would have never had access to in St. Louis. You separate yourself from 90% of other musicians just by BEING IN THE ROOM! I definitely want to work with and bring value to the St.Louis scene. Low key, there are many St. Louis natives in other cities THRIVING in the music industry behind the scenes.

Danii Gold: You recently got into film scoring. What sparked your interest to  get into scoring?

Drew Negus: I actually have always thought it would be cool to work in film scoring. One of my good friends “Cherie Antionette” is an independent film director and actress in Atlanta. She solicited my help on her short film “The Porcelain Chef” and the rest is history. The film is actually award winning now and has been featured at several film festivals. It is a very fun experience! The music behind different scenes affects how you feel about what you are seeing so much! It’s almost like doing magic.

Danii Gold: That is dope and different. I haven’t heard of any music creator say they would be interested in film scoring. So switching topics–You released your first solo EP “Abundance of the Heart” back in June and it’s great! I personally like “Star”, “Swim” and “Signs”. Since you were making music when you were younger, what took you so long to come out with a solo project? Did you ever doubt yourself?

Drew Negus: Thank you! Once the group split up I felt that I should focus on producing and engineering. At a certain point I became completely entrenched in that and kind of lost sight of my passion for being an artist. My experiences over the years as a producer and engineer have led me to this point, and helped me a lot as I have begun my journey as a solo artist. I have been involved in and around the process of being a successful artist and worn a few different hats. I believe that gives me a well rounded perspective of how I should approach my artistry. I always knew deep down that I desired to get back on the mic. I am glad things have played out the way they have so far. My character and thought process have grown tremendously over the years and it reflects in my music.

Danii Gold: Well-put! So, would you consider signing to a label or staying independent?

Drew Negus: At this point, I am focused on being an independent artist and continuing to strengthen my team and resources. When the situation is right I would be open to partnering with a major label. Nowadays major labels mostly only invest in established, successful independent artists. As i continue to grow I plan to keep my options open.

Danii Gold: What do you have coming up? Performances, new music. Etc.

Drew Negus: I am currently working on “Abundance of the Heart II” which I plan to release in mid 4th quarter.

Danii Gold: That’s what’s up! Since you are a man of many titles, what is your end goal? What would you like to accomplish?

Drew Negus: End goal? Make the world a better place! My music career is only a vehicle to do that. Energy cannot be destroyed, only transferred, so I plan to put positive, uplifting energy into my music and spread it throughout the world! I also plan to build a Major Record label over time and connect some dots for independent artists along the way.

Danii Gold: That’s nice and inspiring. Lastly, What message do you want to send in your music?

Drew Negus: I just want to depict my inner world by expressing myself musically. God has me on an amazing journey and I’m blessed to be able to tell my story through music.  I want to motivate my community. I want my sisters to be able to turn up without being womanized. A wise person once told me to put the medicine in the candy. I take that approach in my music. 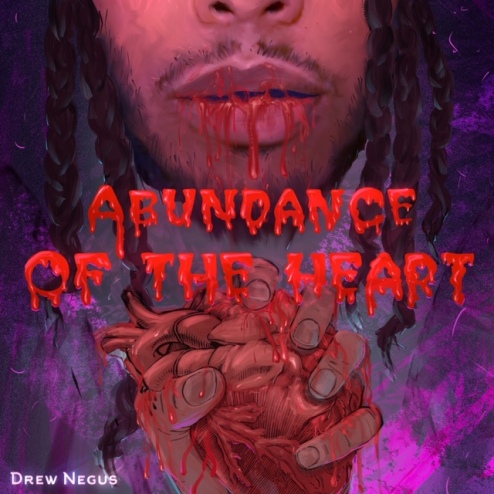