Huey did live a life of crime but his accomplishments within the Black Panther Party overshadowed his wrongdoings, such providing social services to the community like health clinics and free meals for children.

Huey even went back to school to obtain his Ph.D in social philosophy. His life was cut short when in 1989 he was killed in Oakland, California. His teachings will be remembered and the Black Panther Party is forever part of history. 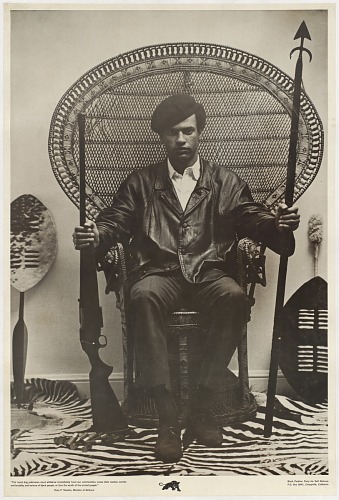 The Black Panther Party was founded in 1966 in Oakland, California by Bobby Seale and Huey Newton. The group was made for self-defense to patrol and protect blacks neighborhoods from police brutality. Their inspiration of starting the group was Malcolm X, who embraced economic and social issues. Malcolm had such a revolutionary philosophical, militant stance that after his death Huey and Bobby were motivated to start the Black Panther Party.

Ways that the Panthers were helpful is, they organized many community programs that provided health clinics, shoes and breakfast for children. They had a 10 point program which were:

They had a belief that economic exploitation was the root of all oppression in  U.S at the time. The Panthers caught a lot attention because of the stern beliefs and it even caught the eye of the FBI director  J. Edgar Hoover. He had his own vendettas against black leadership, including Dr. Martin Luther King. Hoover considered the party a BIG threat to national security and had planned on shutting them down but he didn’t. The party branched out to 45 chapters around the U.S and  they had the support of those branches all over the U.S.

The Black Panther Party had a rivalry with the U.S. Organization which led to a shootout, killing four of the Panther members. They also had officer related shootings that resulted in the death of three members. The Panthers had quite a few altercations but overall their purpose was to protect their communities.

They have inspired, more recently the Black Lives Matter movement, which is a movement that campaigns against violence towards black people; and you know the rest. So Malcolm X inspired the Black Panther Party, which inspired Black Lives Matter and who knows where else thatb can lead to! 🙂