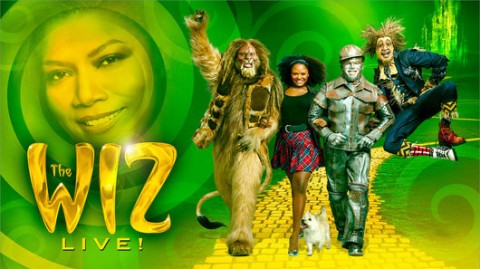 I personally thought The Wiz Live was greatness. Not only was it inspired by the movie The Wiz starring Michael Jackson, Diana Ross, Richard Pryor and many more but the movie added it’s own touch of 22nd century to it. Here is my list of the Top 5 reasons why The Wiz Live:

Addaperle, also known as The Good Witch of the North, made her appearance wearing ALL BLUE, from her hair, all the way down to her shoes. She gave me an auntie vibe. Like one of your hip, middle aged, sweet aunties in your family. She gave Dorothy a kiss for protection and sent her on her way.

ALL of the songs that he sang were perfection!!! “Slide some oil on me” and my favorite song ” What Would I Do, If I Could Feel.” It was so touching. On another note, this guy said “Why the shade?” AND he even hit the new dance, the “dab”; even though it’ origin comes from a strong form of weed, but that’s neither here nor there. Overall I loved his performance.

EMERALD CITY VOGUE was live, and the dancing wasn’t over kill. It looked so smooth, clean and perfected. The dancers didn’t over work themselves. I LOVED IT. Also the “Poppies” dance was very exotic and sexy. I would not have expected that dancing for this kind of musical, but it was in tune and also clean cut.

The Emerald City dancers costumes were legit as hell, just like their dancing AND the Poppies outfits went with their dancing…EXOTIC. I do like the the fact they added flowers on the costumes (i.e Poppy Flowers), OH and I definitely didn’t forget about Ms. Mary J. Blige. It was a cute dress minus the gadgets but since they were applied, it added an “Evil Affect” to her with the wire swirls, and the head pieces and just the black look overall. Her boots she wore were HOT and looked comfy too. I didn’t too much care for her acting in the musical but I loved her outfit lol.

Let me break it down without going on a rant:

5 thoughts on “Why “The Wiz Live!” was AMAZING”