Todays Black History Fact is about Eartha Kitt. She was the original singer of the Christmas hit “Santa Baby” and was the first Black Catwoman in the Batman and Robin series in the 1960s. 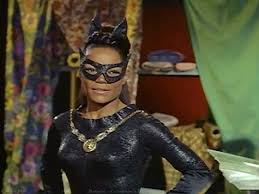 Eartha also played in Boomerang as Lady Eloise, Madame Zeroni in Holes and the voice of Yzma in The Emperor’s New Groove which won her an Annie Award for Outstanding Individual Achievement for Voice Acting by a Female Performer in an Animated Feature Production. She’s been on television and in movies since the late 1940s (uncredited).

Eartha acted in films up until a year before she passed in 2008 from colon cancer.

May her recognition live on and may she Rest In Peace.