Yesterday was the 24th anniversary of Spike Lee’s movie Crooklyn. I loved this movie as kid; just seeing what it was like growing up in a different culture and during a different time. The setting was 1973 in Bed-Stuy New York, but of course it was filmed in 1993.

This film was Spike Lee’s second film and just image, he’s created other films and they were just as good and even better than this one, depending on what you like.

I love how Troy was a tough cookie. She was had three older brothers and a little one and had to adapt to how rough they were. She wasn’t all girly like some of the girls on her block and she even stood up to bullies on her block that were wayyyy older than her.

She dealt with the normal pre-teen problems—wanting to grow boobies. When I was that age, I wanted boob so bad and then BOOM! I was blessed with a big booty. yay

From dealing with arguing parents, to experiencing a culture shock down south with her cousin to losing her mother..

Too eventually having to be the mother figure in the house and many more. 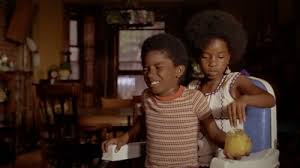 Happy Anniversary to one of my favorite childhood movies. What’s your favorite Crooklyn  scene?