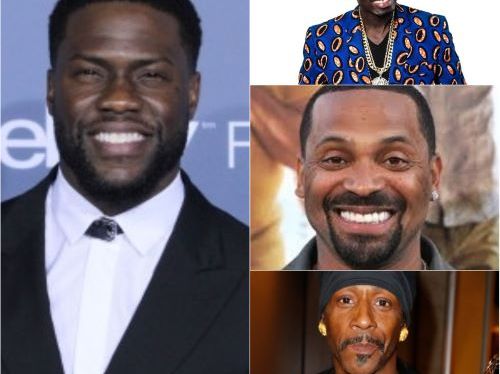 I published my first story with Delux Mag. Check it out below:

Is comedian beef, the new beef?

In the past few months, comedians such as Michael Blackson, Katt Williams and Mike Epps have been having a common beef, or disagreement with someone specific—Kevin Hart. The instance just this year was Kevin Hart and Michael Blackson. Kevin spoke about cheating on his wife and turned lemons into lemonade by making the scandal into a comedy tour, but Michael Blackson felt the need to speak on it and even joke about it.

“It’s like you can talk about your sister—but nobody can else do it.” Blackson made jokes about Hart saying he should have changed his story and not admitted to cheating. Hart didn’t take his comments lightly and he responded on the Breakfast Club by saying, “Michael was looking for likes and he’s jeopardizing his relationship with him, just to get some attention.”

The back and forth went on for a couple months until they finally squashed it in April.Months later, Hart and Mike Epps had some exchanging of words. Epps replied to a fan’s comment on Instagram by saying, “Everybody was funnier than Kevin Hart.” Of course, Hart didn’t take that lightly and responded to Epps on Instagram calling him bitter and stating he wants to see him win as well.

He added that if his success makes Epps sick, then he’ll hand him a throw up bucket because this next year will be his best year. Epps responded back on Instagram, stating, “Kevin is “starving” to be a victim and he talks about everybody.”

He continued with pointing out everybody has something to say about Hart, so he shouldn’t be singled out. Both Epps and Hart have been cool for years, and he states there isn’t a beef, and if it was he wouldn’t have responded. The last thing he said in that moment on Instagram was “Like I told you face to face Congrats on everything man. You seem to be a great person…but I still don’t think yo a** funny.”

Click the link above to see more of my story on DeluxMag.com

Over the weekend I went to see Night School starring Tiffany Haddish and Kevin Hart. If you haven’t seen the million previews over the last few months, the movie is about Kevin Hart being a  high school dropout and he has to go back to high school because his job as a top salesman ended, due to him burning down the store. In order for him to work as a financial analyst at his friend’s company, he has to get his GED. But in the mean time, he’s working at fast food chicken spot. His nigh school teacher is Tiffany Haddish and she is TOUGH. She plays somewhat of a serious, which is different for her and I liked that. The story line is pretty predictable, because in the end he gets his GED..after 2-3 times of taking the test.

I feel like the jokes weren’t that funny. Yes, the movie had it’s funny parts but overall, I could’ve waited to see this movie on TV or come out on DVD. I like Tiffany Haddish role more than Kevin Hart because she played something reverse of what she usually does, which is comedy.

I will commend Kevin on producing this film under his HartBeat Productions Company; BUT, to me, he is not as funny as he use to be anymore. Yes, he has legendary jokes that we can still use to this day BUT I can’t think of any recent joke that has been truly funny. I would love to see him play a serious role in an action film, with limited comedy or limited typical Kevin Hart comedy, if that makes sense.

Has Kevin Hart become unfunny? Let me know your thought below!

I’d be the first to say that I’m not a huge Meek fan, but I like a few of his songs but have yet to listen to a full album of his. Dreams & Nightmares is my shit tho!

A judge, who denied his request for bail, decision was overturned by the Philadelphia Supreme Court. If you haven’t been keeping up, he was sentenced to 2-4 years in prison for a probation violation, which stemmed from him being convicted of drug & gun charges back in 2008.

Overall, the judge had it out for Philly rapper. Reports came out that the female judge who convicted him of the 2-4 years, was trying to persuade him to sign under her friend’s record label, then wanted him to sing a Boys 2 Men song pleading for his freedom. Of course he didn’t and BOOM he’s been in jail every sense. The public has been very supportive of the injustice that’s he’s faced while this whole situation has prolonged. Celebrities from Jay-Z to T.I. to Kevin Hart have been advocates for him since the beginning and luckily they used their platforms to bring awareness of his situation, a black man being “overly” charged for unnecessary reasons.

When Meek was released, his friend Mike Rubin, who is co-owner of the Philadelphia 76ers, picked him up in a private helicopter and whisked him away to the 76ers playoff game against the Miami Heat, and coincidentally THEY WON! Even Kevin Hart silly ass was there with him, sitting court side. Meek was even able to ring the ceremonial Liberty Bell replica.

Not only did the the 76ers win the playoff, but they won first round, and on top of that, it’s been 5 years since they’ve been in the playoffs, so it looks like it’ll be a great year for Philly. They already won the Superbowl and if they get even further in the playoffs and not win, it’ll still be a win for them overall.

What was very meaningful to me was seeing Meek with his son on the court. I think it’s beautiful to see him reunited with one of his sons.

I’m glad that an innocent black man is free and he says he’ll be using his platform to shed light on situations like this. Social injustice is real and Meek says:

Comment below your thoughts on the whole Meek Mill situation.